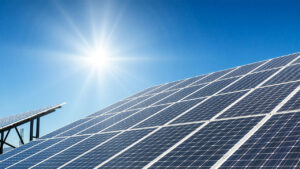 Solar Cells are made up of silicon with semiconducting properties, chemical doping will be done with phosphorus with silicon on the negative side (-ve) is called an N-type junction diode (surplus of electrons) and boron with silicon on the positive side (+ve) is called as P-type junction diode (deficit of electrons). When the doped silicon absorbs photons released from the sun, the electrons flow from negative to positive which establish the flow of current. From Solar Panels, Direct Current (DC) power is generated initially, with the help of Solar Inverter electricity is converted into Alternating Current (AC) used in Residential appliances. The solar panel installation is used for solar ground-mounted and solar rooftop purposes. There are different types of solar panel technologies: These think films are very thin when compared to “mono” and “poly”. These panels can be applied as an adhesive directly on surfaces likes residential roofs, boats, any other open surface and bodies, etc.

Continuous research and development are taking place on solar panels focusing on: